Greater Manchester, contrary to popular belief, is infact rich in bird life and supports a wide variety of habitats, enjoying a mild climate attractive to many wintering birds. On average, around 200 species are recorded each year and the total number recorded in the county currently stands at 305.

It is VERY important that observers further the knowledge of the avifauna of the county and help conservation by contributing their records for the annual County Bird Report and this page is intended to assist observers in doing just that! Recent planning developments like the Greater Manchester Spacial Framework proposes to build on the county's green belt land and it is those bird records submitted to the Greater Manchester Bird Recording Group which are utilised in official objections to such proposals.
​
Please use the tabs to open the various selections
<
>
TO SUBMIT YOUR COUNTY BIRD RECORDS TO THE GREATER MANCHESTER BIRD RECORDING GROUP

YOUR BIRD RECORDS ARE EXTREMELY VALUABLE TO US!
We (the Greater Manchester Bird Recording Group), urge all observers in the county to submit their records to us on a monthly or annual basis. Your records will not only then go into the county's definitive bird records database and be utilised in the annual county bird report (where you will rightly be acknowledged for your contribution) but perhaps more importantly they will be used in important conservation issues throughout the county.

There are two methods of submitting your records to us:

Swift is the Greater Manchester Local Record Centre’s new online recording system launched in April 2020 to replace RODIS. Having spent many hours testing Swift in the field and inputting several thousand records, GMBRG has decided to adopt it as our preferred method for submitting records. MapMate has served us well since 2004 when it succeeded Avianstore as the GMBRG’s database but is beginning to show its age, with many users experiencing problems running it on Windows 8 and 10. The move to Swift will ensure the long term viability of the GMBRG database and gives us access to professional IT support. We will continue to provide support to those recorders using MapMate and the GMBRG Excel file, however, we think that once you have tried Swift you will want to make the switch. The main benefits can be summarised as follows:

Recording accurate locations
The GMLRC MapApp which you may already be familiar with is an integral part of Swift. Zooming in and clicking on the map allows you to record accurate locations for the birds you see. Not only is this extremely valuable in identifying which areas of a site are used by which species, it will also allow you to map your sightings of individual species in your local area or even across GM. The MapApp also calculates whether each grid reference you input is inside, or outside, a Site of Biological Importance (SBI), so allowing your records to be used by GMEU’s ecologists in the five yearly assessment and review of these sites. There is no other recording system available which does this for Greater Manchester.

Breeding Evidence Codes
You will doubtless be aware of the importance of recording breeding evidence, especially between March and July. There is a drop-down list of breeding evidence codes which allow you to effortlessly add information to each record on whether a bird is singing, displaying, nest building, carrying food etc. So, logging this information will allow you, and us, to assess the number of territories for an individual species at a site and more importantly the fluctuations in numbers from year to year. For species such as Little Ringed Plover and Willow Tit we will be able to calculate the numbers of confirmed, probable and possible breeding pairs and report these to the Rare Breeding Birds Panel for inclusion in their national database.

Future Developments
Whilst Swift is fully functional as a recording tool, the reporting side is still under development. If you already submit your records to GMBRG these have been shared with GMLRC and will be migrated to the Swift database. The current plan is that by 2021 you will be able to view and download all your historic records, as well as those you have entered directly into Swift. You will also be able to view on Google Maps the distribution of the different species you have recorded across GM over the years. There will be a library of standard queries (like MapMate) which will generate your species lists for the sites you visit, as well as your GM year and life lists. You will also be able to request custom queries to analyse your records in many different ways.

Swift is accessed via the GMLRC website gmlrc.org/wildlife_recording/  where you can download the Getting Started with Swift guide which we would recommend you read. If not already a registered user, you will need to sign up and create a username (your email address) and password, which the guide also explains how to do and the basics of using the system.

* IF YOU ARE INTERESTED IN USING SWIFT PLEASE DO CONTACT THE COUNTY BIRD RECORDER TO DISCUSS FURTHER IF NECESSARY AND/OR TO NOTIFY HIM OF YOUR INTENTION SO WE MAY BE ABLE TO PROVIDE FURTHER ASSISTANCE DOCUMENTS AND ADD AS GMBRG RECORDERS.
2. Greater Manchester Ecology Unit simple recording form
A simple method of recording your bird sightings only for very occasional records, but which are shared with the Greater Manchester Bird Recording Group
Click on the image below to find more details.

TO SUBMIT A COUNTY OR NATIONAL RARITY
See also under the 'guidelines' tab
​
A rarity report form to use when submitting county rarities can be found on the file download below:

If observers are in any doubt as to what constitutes a county or national rarity they should not hesitate to contact the County Recorder.
GUIDELINES FOR SUBMITTING COUNTY OR NATIONAL RARITIES
​
The County Rarities Committee urges all serious observers, however experienced, to complete rarity forms so that a truly scientific record can be maintained of the county’s avifauna. Observers finding a national or county rarity should take a description in writing and if possible obtain a photograph and find another competent observer to confirm the identification. When submitting a rarity description, observers should include as much possible detail, taken from field notes (which should ideally be included in the submission), bearing in mind that the Rarities Committee can only assess the submission from the information provided by the observer. Line drawings are always useful and greatly appreciated by the committee, no matter how poor the artist perceives them, and can often provide great clarity to the overall submission. 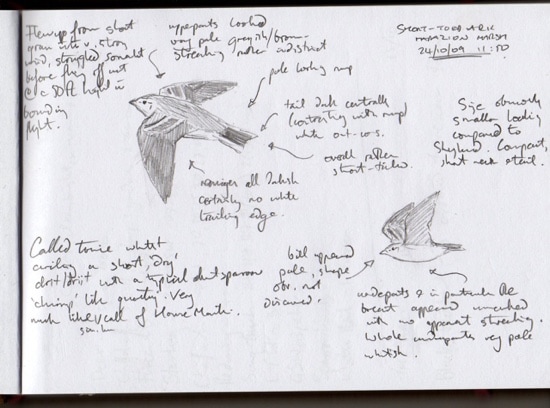 Example of actual field notes (Short-toed Lark in Cornwall, October 2009, Ian McKerchar)
The use of digital photographs is increasing dramatically and whilst we would encourage the use of photographs, especially as an addition to a submission, observers should still continue to obtain high quality field notes, even if the submission meets the criteria for assessment by photo only, as field notes may be invaluable in the event of a query. Digital photographs of any quality should be provided to the committee as an email attachment (not included within the text of an email or other document), preferably without any computer enhancement or touch-ups and of any file size bnut preferably as large as possible.
Conventional film photographs and professionally developed digital photographs should be included, preferably of atleast 6’x4’ size and home printed digital photographs are acceptable provided the print quality is of a sufficiently high standard. We would welcome observers requiring advise with any of the above processes to contact Ian McKerchar to discuss the matter.

Further information relating to how and why we should submit rarities can be found on the 'Articles' page of this website, under the 'miscellaneous' section.

Depending on the circumstances, of which the welfare of the bird is paramount at all times, with serious consideration given to access and possible habitat damage, the sighting may be reported to one of the commercial bird information services. Observers in any doubt should contact Ian McKerchar on 07958 687481 for advise.

All national rarities should be submitted initially to the County Bird Recorder, Ian McKerchar and NOT directly to BBRC, which enables me to make a copy of the submission and to iron out any queries before it is then forwarded to this very busy committee. This route for submissions is also that preferred and requested by BBRCNo county or national rarity will be accepted unless supported by a description, other than, in the case of an ‘on the nod’ decision of a county rarity, the finder is informed by the County Bird Recorder . All observers, however experienced, are required to submit descriptions: it would be invidious to make exceptions. It is imperative that observers complete the necessary rarity forms as it is universally accepted that only those records of rarities which are submitted in writing to the appropriate county or national committee will stand as authenticated observations, and can therefore be used for national statistics, conservation purposes etc. It is the function of the county bird report, in each ornithological recording county to maintain a definitive list of authenticated records. This list may of course contradict records received in clubs or site reports. Other records of unusual birds may, at the discretion of the County Rarities Committee require a description, and in any case, records of rarer, non-description species will only be accepted with an observer's name attached (i.e. mentions on site wardens' lists, birdline, magazines and pager reports will not be sufficient). In influx years, the requirement for a description may be suspended at short notice by the Committee. The committee may also ask for descriptions to be submitted for any other record, e.g. exceptionally early or late migrants, species seen away from normal habitats.
Rarity submissions assessed by the County or National Rarity Committees will be updated to the relevant year as and when they have been circulated and a decision reached. Any records which have been submitted but do not yet appear on the lists are most likely still in circulation but please contact me to check if necessary. Records not submitted or notified to the County Recorder by their finder are denoted with 'per CR'.

Whilst a short explanation has been given for any records found not proven, I encourage observers of those records to contact me to discuss them further and will endeavour to provide a fuller and more detailed reasoning wherever possible. Observers noticing any errors (credited observers, age/sex and dates, particularly final sighting dates) should also contact me so they can be corrected.
2012
RECORDS CONSIDERED PROVEN:

CRESTED TIT, Horwich, 6th March, photo (whilst there was no argument over the identification, image EXIF data had been removed and could therefore not be verified)

​
The following bird colour-ringing projects are ongoing within Greater Manchester. All sightings of any of the following would be very warmly welcomed and in all cases, the study organisers will be able to supply information on original ringing details and any other sightings:

Mute Swan
North West Swan Study: Blue rings on the right leg. Either 3 letters/numbers or, since 2013, 4 digits beginning ‘4’ plus three letters. Please contact Steve Christmas: se.christmas@ntlworld.com
Some birds are metal ringed only and details of these can also be obtained from Steve Christmas.