Inane rambling and musings from Ian McKerchar, sometimes hopefully not so inane...

Please note that opinion and comment within this section are entirely my own and do not represent those of the Greater Manchester Bird Recording Group or its Rarities Committee, unless otherwise stated.
THE SMELL OF NOSTALGIA
June 2017
​
“nostalgia |nɒˈstaldʒə|, noun [mass noun], a sentimental longing or wistful affection for a period in the past”

I’m not an overly nostalgic person or atleast I didn't think I was. Sure, I often long for the days when birding was simple, uncomplicated and frankly just about the birds but that’s as much in resistance to ‘modern’ birding as it is about nostalgia, so it was something of a surprise when I recently came over all nostalgic in the most unexpected fashion. Whilst smell isn’t something you instantly associate with birding, a hobby done with eyes and ears (or increasingly with fingers and an internet connection these days), smell can often evoke nostalgia. And so it was that recently, I bizarrely combined smell, nostalgia and birding all in one go!

Wandering through a local garden centre on my way to get a coffee I happened to pass a display of Barbour jackets. I was immediately drawn towards them and as a smile widened across my face, I held one of them aloft, proudly declaring to my wife (and all and sundry around) “I used to have one of these”! As I held it aloft, not realising that these days they’re so expensive they have little alarm wires thread through them, something hit me; the smell! That slightly musty, oily smell of the jacket took me back to the time when I owned one way back in the 1980s and I was instantly swept away in a wave of nostalgia.

Of course, back then Barbour jackets were de rigueur for birders and pretty much everyone had one. Gore-tex, though invented in 1969, was only really available in brightly coloured golf or high-end mountaineering jackets back in the 1980s and so it was Barbour who birders turned to in their pursuit of a hard-wearing waterproof jacket which blended into foliage. And they served us well too. They were indeed waterproof (initially at least), came in drab green or brown colours, had big pockets for notebooks (yes everyone had one back then) and mars bars and were pretty robust to boot. I still remember my own very fondly indeed, being a faithful companion on daily birding outings, regular national twitches (and dips!) and many birding holidays. Whilst it started out as a pristine, perfectly manufactured garment, the hard labour of intensive birding quickly took its toll yet gave it its undeniable character. It cracked and wore through at the creases, smelled musty, oily and more than occasionally just downright awful and the fabric got greasy in warm weather or became rock hard in the cold. But like an old leather Chesterfield sofa it had character, a ‘lived in’ look and feel which only came via heavy usage and became almost a badge of honour, proof to all that you were a ‘hard-core’ birder. Of course, eventually those cracks and wear points leaked when it rained and the lack of maintenance (you were supposed to re-wax it every so often but it never got done) saw its overall water repellency fall off until it merely absorbed water like a paper towel.

In the late 80s the old faithful Barbour was eventually put to rest, being replaced by a new Gore-Tex Berghaus jacket in almost birding-friendly dark blue. This then tour de force in waterproof garments was light years ahead of the Barbour in every respect but was soon itself replaced by the then pinnacle of mountaineering jackets with a Mountain Equipment Karakorum 2, a jacket designed to repel all that the highest peaks in the world could throw at it. Needless to say, it merely laughed at the best I could do in the face of a day’s soaking in the Cornish Penwith valleys and was itself only replaced after many years of exemplary service with an all black Mountain Equipment Kongur jacket. Its safe to say the Kongur is ridiculously capable. It’s 3-ply Gore-Tex Pro Shell Ascendor fabric is as waterproof as wearing half a dozen black bin bags, it has more pockets than I know what to fit into them and is as hard wearing as a galvanised nail, yet despite its extreme efficiency it is merely a piece of functional clothing; I admire it but I don’t love it.

Like that old worn yet ever so comfortable leather sofa, that old banger of a first car you ever owned which broke down a lot and cost you more than it was worth or the first pair of binoculars you had which were not much better than two sellotaped together toilet roll tubes but which you keep to this day gathering dust somewhere; somethings you cherish not for their functionality or value but instead for the sheer memories which using or even just thinking about them evokes. And so it was with that new and now really rather expensive Barbour jacket which brought back my young birding memories so vividly. For a good while afterwards I convinced myself I’d buy another Barbour jacket, doubtless in an attempt to re-capture the wonderful emotion of that '80s era of birding but of course it didn’t last long, not until the next downpour which the Kongur shed like the proverbial duck’s back and allowed me to cram my mobile 'phone, digiscoping adaptors, microphone, notebook (yep, still hanging onto that) and now seemingly much smaller Mars bars its multitude of deep, expansive pockets.

Clearly, it seems there is a limit to just how far one can pursue nostalgia in the face of technology but whilst understandably embracing all the tech’ the more modern era can offer it seems I still cherish a time when you’d all huddle around the back of one of the small handful of photographer’s cars at twitches in order to buy their latest prints of rarities, curse the pips in that big red ‘phone box which signalled your money was running out but you hadn’t even got to hear about the birds you really wanted to know about yet (and the fact that the Birdline ‘phone operators seemingly all spoke so slowly in order to drag more money out of you), didn’t even know or care what DNA was let alone that bird shit had it in it and could be used to separate those practically impossible species we'd enjoy spending so much time arguing about or when reputations as a good birders were formed by actually going out in the field and looking at, finding your own and contributing to, birds.

​And all that was brought about by the smell of a posh jacket! So, what's your smell of birding nostalgia? 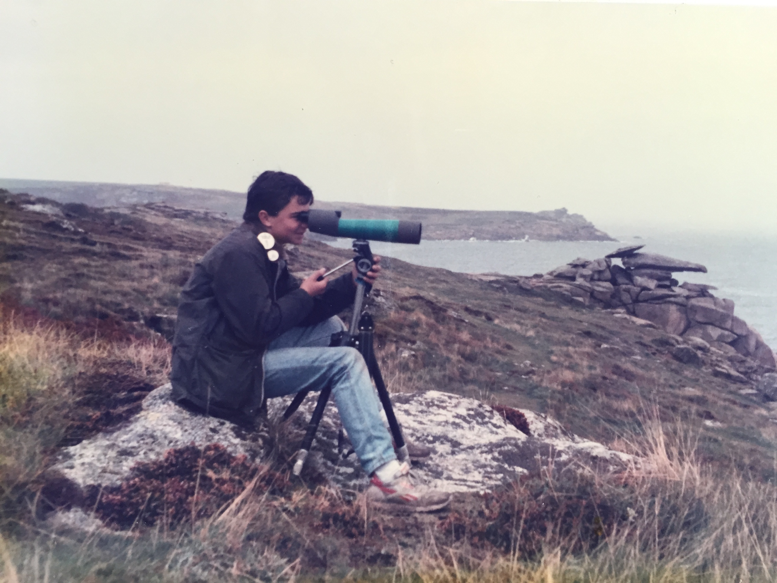